The Back Brusly Oak 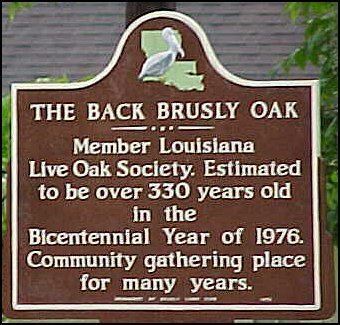 The Back Brusly Oak

At the base of the Back Brusly Oak tree; intersection of West Main Street and LaBauve Street; Brusly, LA 70719

Member Louisiana Live Oak Society. Estimated to be over 330 years old in the Bicentennial Year of 1976. Community gathering place for many years.

This marker honors the Town’s symbol – the Back Brusly Oak. The 350 year old oak tree, was enrolled in the Live Oak Society in 1969 through the efforts of Mrs. Ethel Claiborne “Puffy” Dameron, founder of the West Baton Rouge Historical Association. The marker was a gift from the Brusly Lion’s Club in 1976, when the town celebrated its 75th anniversary. During the 2001 Centennial the marker was refurbished by two Lion’s Club members.

Use of the Tree

In the early 1900s, a dance hall sat next door and several “Mom and Pop” stores were situated within walking distance from the tree. People would come to get the things they needed and they would talk and visit underneath the oak’s protective limbs. It was the town’s gathering place for many years.

Between July 4 and July 8, 2002, the marker was dug up and hauled off. Over $1,200 in rewards were offered for its’ safe return. Thanks to the efforts of the news media and the Town officials, the marker was recovered from the Gulf Intracoastal Waterway near Morley Marina. It was cleaned and re-erected to its’ original location beside the Back Brusly oak where it stands today.