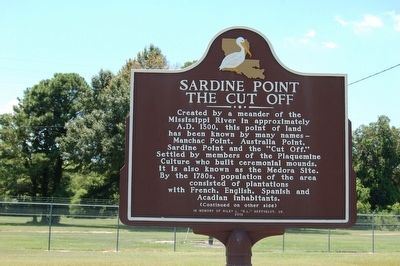 Created by a meander of the Mississippi River in approximately A.D. 1300, this point of land has been known by many names - Manchac Point, Australia Point, Sardine Point and the "Cut Off." Settled by members of the Plaquemine Culture who built ceremonial mounds, it is also known as the Medora Site. By the 1780s, population of the area consisted of plantations with French, Spanish and Acadian inhabitants.

After the 1780s, a thriving self-supporting community with homes, a school, a Catholic church and stores grew around the plantations. Following the Flood of 1927, a new levee built at the neck of the peninsula cut off the point and dispersed inhabitants. Until the late 1980s, many families resided in the "Cut Off." Stories of those who lived here are treasures in the hearts of many whose ancestors formed the community which was once a wonderful place to live.