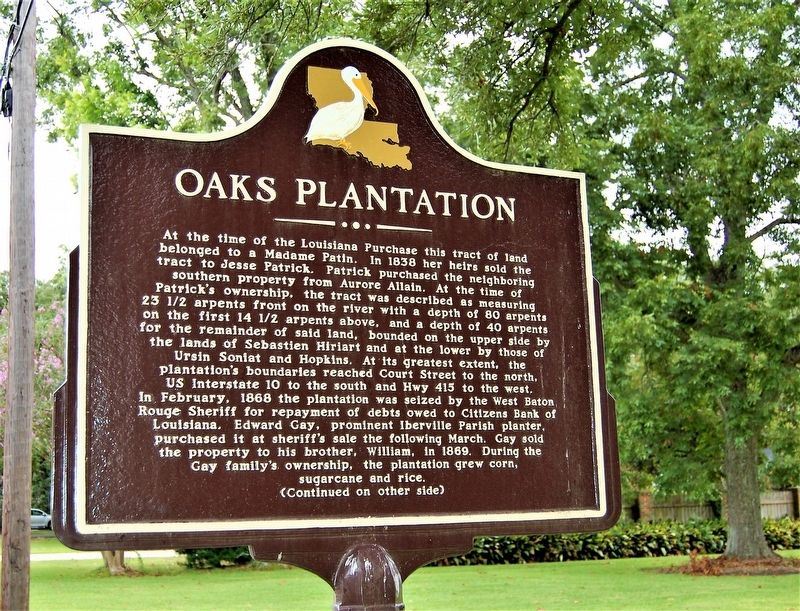 At the time of the Louisiana Purchase this tract of land belonged to a Madame Patin. In 1838 her heirs sold the tract to Jesse Patrick. Patrick purchased the neighboring southern property from Aurore Allain. At the time of Patrick's ownership, the tract was described as measuring 23 1/2 arpents front on the river with a depth of 80 arpents on the first 14 1/2 arpents above, and a depth of 40 arpents for the remainder of said land, bounded on the upper side by the lands of Sebastien Hiriart and at the lower by those of Ursin Soniat and Hopkins. At its greatest extent, the plantation's boundaries reached Court Street to the north, US Interstate 10 to the south and Hwy 415 to the west In February, 1868 the plantation was seized by the West Baton Rouge Sheriff for repayment of debts owed to Citizens Bank of Louisiana. Edward Gay, prominent Iberville Parish planter, purchased it at sheriff's sale the following March. Gay sold the property to his brother, William, in 1869. During the Gay family's, ownership, the plantation grew corn, sugarcane and rice.

Levee maps in 1871 and 1914 depict the property with a residence set in a grove of oaks, presumably the plantation's namesake. Also on the plantation was a river landing, sugar mill, quarters cabins and vegetable gardens. The house site was lost to the river in 1914, but the residence was relocated west to its present site. "The Oaks, Inc.” was incorporated in 1924, and began subdividing the plantation into smaller lots around the house. The site of the house was enhanced with formal gardens by noted West Baton Rouge landscape architects Theodore and Lou Bird Landry. The home is 3 rooms wide by 2 rooms deep with additions to its rear. A deep porch lines the front, and the whole is covered with a hipped roof topped with a lyre shaped lighting rod. Detailing of the house is restrained classical revival. Hand hewn and machine sawn wood framing is found throughout. Timbers in the roof and floor framing contain old mortise and tenon joints, but nails dating from circa 1880 are used as the sole joining method for the structural members. This is indicative of a structure built with salvaged materials or an older structure that has been significantly altered.