High school opportunities in the parish date to at least 1897, when Eureka Central School in Brusly offered classes to white students in the ninth, tenth, and later eleventh grades. In 1899, the West Baton Rouge School Board made plans for three high schools, Duvall, Port Allen and Brusly. Eventually two of the three high schools were established and were open to white students. The first Port Allen High School opened in 1920. The principal was Miss Amelia Stevens who was in charge of the two-story brick building, which included seven classrooms for grades first through eleventh. The original Port Allen High School was located on the south side of Rosedale Road at N. Jefferson Avenue. In 1949, Cohn High School was opened for African American students in West Baton Rouge Parish and initially offered grades seventh through twelfth. 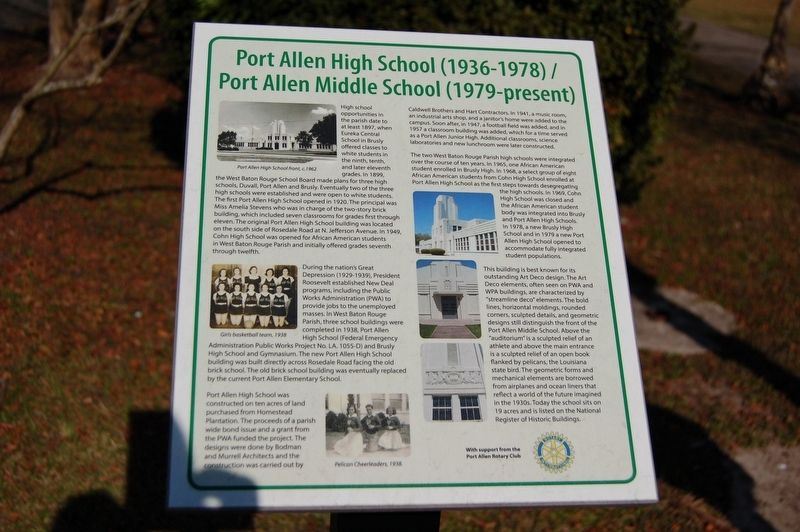 Port Allen High School was constructed on ten acres of land purchased from Homestead Plantation. The proceeds of a parish wide bond issue and a grant from the PWA funded the project. The designs were done by the Bodman and Murrell Architects and the construction was carried out by Caldwell Brothers and Hart Contractors. In 1941, a music room, and industrial arts shop, and a janitor's home were added to the campus. Soon after, in 1947, a football field was added, and in 1957 a classroom building was added, which for a time served as a Port Allen Junior High. Additional classrooms, science laboratories and a new lunchroom were later constructed.

This building is best known for its outstanding Art Deco design. The Art Deco elements, often seen on PWA and WPA buildings, are characterized by "streamline deco" elements. The bold lines, horizontal moldings, rounded corners, sculpted details, and geometric designs still distinguish the front of the Port Allen Middle School. Above the "auditorium" is a sculpted relief of an athlete and above the main entrance is a sculpted relief of an open book flanked by pelicans, the Louisiana state bird. The geometric forms and mechanical elements are borrowed from airplanes and ocean liners that reflect a world of the future imagined in the 1930s. Today the school sits on 19 acres and is listed on the National Register of Historic Places.